Student Travels 11,500 for pioneering treatment To save her eye 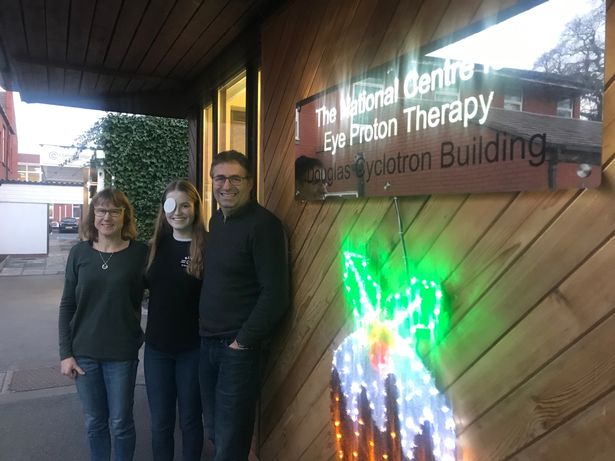 Student Travels 11,500 for pioneering treatment To save her eye

A young adult from New Zealand was shocked to learn that she had to take an 11,500-mile trip to Wirral or risk having her eye removed.

Student Nicole Williams was left ‘in shock’ when she was told a mole on her eye had turned cancerous – but luckily her new doctor had a potential solution.

Nicole, 20, had recently moved house and was now under the care opthalmic specialist Dr Harry Bradshaw – who happened to know about state-of-the-art proton beam therapy offered thousands of miles away by the Clatterbridge Private Clinic in Bebington, Wirral.

Nicole, from Oamaru, in New Zealand’s South Island, first noticed the mole on the Iris of her right eye at aged seven.

She said: “I think I said to my mum ‘what is that little brown dot in my eye’ and she took me to get it checked out.”

Nicole, who studies Animal Science at Massey University, then had yearly check-ups but no changes were detected.

However, in August last year she got the devastating news that she had melanoma, which had spread to the ‘gutter’ of the eye and reached the blood supply.

She said: “The pupil shape had started to distort slightly and I had started to notice my sight was quite as good in that eye, but it was only a slight difference.”

Nicole said: “I went into complete shock. (Dr Bradshaw) said ‘your options are removal of the eye or go to England for proton beam therapy’.

“I instantly said I want to do anything else before removal of the eye.”

The National Centre for Eye Proton Therapy is based at Clatterbridge, and is the only proton therapy facility of its kind in the UK.

The treatment is an extremely precise form of low-energy radiotherapy, and is ideal for killing cancer cells without damaging critical tissue close to the tumour.

Dr Bradshaw had previously sent another patient for proton beam therapy at the clinic, where 2,830 patients have received the treatment since it started operating in 1989. Patients visit Clatterbride Private Clinic from all over the world and the UK.

Dr Andrzej Kacperek, consultant proton physicist said: “The interesting part about proton therapy is that the beam is tailor-made to a particular tumour in a particular patient.

“We only need to use so much radiation; in (Nicole’s) case we only needed to penetrate 5mm, but no more; this leaves the rest of the eye quite healthy. This is extremely important, especially for a young patient like Nicole.”

Nicole was sent for treatment only two weeks after finishing her end-of-term exams, and arrived in the UK with her mum Christine, and dad Bret, on December 3.

Nicole underwent some preparatory treatment and spent a week sightseeing before heading back to Wirral for four sessions of proton beam therapy over the course of this weekend.

She said: “Everything that has happened feels so surreal, I can’t really believe I am here getting this treatment.

“I am so grateful it exists, otherwise I would have lost my eye. I am so grateful for everyone, for Harry Bradshaw, the Department of Health in New Zealand and everyone here at Clatterbridge.”

Side effects might include a cataract, and Nicole might need glasses or will develop a dry eye, but she said: “It is a small price to pay compared to the alternative of losing my eye.”

The treatment is available to NHS patients but was organised for Nicole by The Clatterbridge Private Clinic, the private unit based at the Wirral hospital which re-invests money back into the NHS.

Nicole’s treatment was paid for by the New Zealand Ministry of Health.